Reading in the newspapers of the demise of the cuckoo in some parts of the country makes me realise how incredibly lucky we are here in the Abbey valley where things have not really changed over the centuries. We heard the first cuckoo this year on May 2nd; he may have been cuckooing earlier but that is when we heard him first. It brings real joy when friends return safely; the swallows to their same nests in the Abbey outbuildings and the cuckoo to the valley to join old friends like the woodpeckers who seem to be pecking away all year. We have a lovely greater spotted woodpecker visiting the bird table every day.

In the house and gardens nothing much changes either! Old friends return in the spring to be our wonderful house guides for the new season. Some we will not have seen all winter and it is lovely to catch up again. We are all that bit older! Some things have been in the house since it was built in the 12th century like the old documents which have been here since the Abbey was built and gifted by Lord Dynham almost 900 years ago. Up until this year the last piece of serious furniture to come into the house was the wonderful, segmented table by Jupe which my mother in law so cleverly bought in 1936 for £10 3s 6d and which so impressed His Excellency The Emperor Haile Sellasie when he stayed in the Abbey though he was much more interested in where my father in law kept his prisoners! Our kitchen has remained unchanged since the 1940s! I suppose we are regarded as some sort of freaks nowadays but this is how we like it and we see no reason to change for changes sake. We never throw anything away – an old envelope is always useful! However from the visitors point of view it is always fun to see changes. We have been incredibly fortunate this 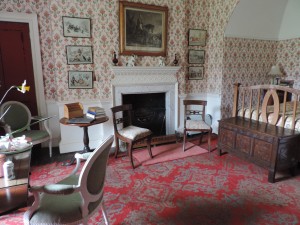 spring to have been given some wonderful furniture thanks to the generosity of some visitors to the house on the first day of the season. They decided that the Abbey was the perfect place for their beautiful 16thC sword chest and Waterloo chairs which had been in their family for ever. We are hugely grateful; they know who they are and we are forever grateful to them. Extraordinarily at much the same time an old friend of Christine Cobbold ( Stucley), who had happy memories of staying at the Abbey as a young girl 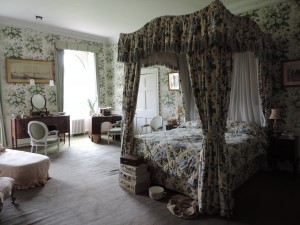 in the 1960s, was moving into a smaller house and has given us a beautiful Colefax and Fowler four-poster bed which was too big for their new home. It is a wonderful addition to no 3 bedroom and again we are hugely grateful. In one week these wonderful gifts have done so much to add to the visitor experience, the first furniture to come into the house for 80 years!

We have also had a very emotional homecoming of six photograph albums and diaries from my husband’s great uncle and cousins who spent a great deal of their lives at Hartland Abbey at the beginning of the 20th century. All are dead now but the books are an extraordinary and loving record of a devoted family in those years before and after the First World War. Major Humphrey St Leger Stucley was killed at the first battle of Ypres in October 1914 leaving a widow, Rosie, and two sons, Peter and Lewis. The younger, Lewis, died as a result of wounds at the Battle of Salerno in 1943. Peter became a journalist with the BBC and author; his broadcast on the Home Service just after the war entitled ‘A Devonshire Boyhood’ on his recollections of staying at Hartland Abbey with his great-aunt as a young boy are a beautifully written insight into life in a country house at that time. We intend to exhibit some of these albums and the recollections, in the Abbey in the near future. We have an enormous debt of gratitude to some wonderful people, Ken and Maureen Langford, who were asked to clear a friend’s house in Oxfordshire after she died; they recognised that these were cherished possessions of a family unknown to them. After thorough research Maureen Langford traced our family and reunited these priceless albums to the Stucley family. If it had not been for Mrs Langford they would surely have been taken to the tip and this important link in our family history would have been lost forever. Thank you so very much. 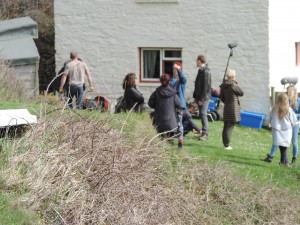 No sooner had the furniture arrived than the BBC arrived too! The peace of the valley evaporated as huge articulated lorries rolled in to be production offices, make up, hairdressing, catering and rooms for actors. Our car park 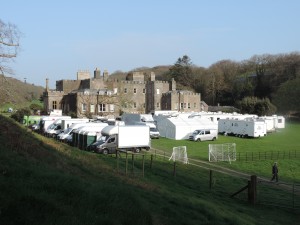 was the base for the BBC 6 part serial ‘ The Night Manager’, adapted from the John Le Carre spy thriller, and filmed in Hartland and at Blackpool Mill Cottage. It stars Tom Hiddleston, Hugh Laurie and Olivia Colman and will be shown on the BBC in 2016. It was a fantastic week. Everyone worked incredibly hard to get it all done before they pulled out en route to Morocco and Majorca having filmed in London and Switzerland before coming to Hartland Abbey. Our location manager, Steve Hart, was so professional and made it all work so well for everyone. The film crew were all wonderful. We can’t wait to see it on screen. The only hint I can give is that Blackpool Mill will look a lot less clean than it does when Anne gets it ready for our holiday visitors! No more hints….! 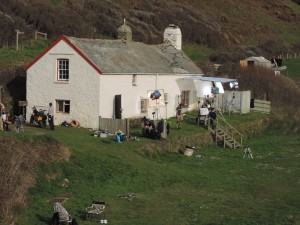 All this was happening at the same time as the Grand National meeting when I normally give myself three days holiday in front of the teli. As parents in law to a National Hunt jockey it is very difficult to watch without being consumed by nerves but Tom had a wonderful ride in the National on Soll, right up front keeping out of trouble, and finishing eighth. He had had a very good Cheltenham with three winners and a good Aintree winner too which takes off the pressure. The film truckies were all keen betting men who insisted on backing Tom in every race. They went home a lot poorer! 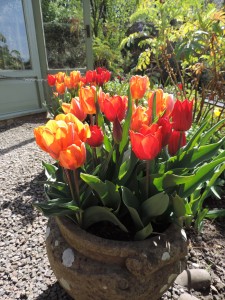 More down to earth, Spring has also been all about tulips. We have had a stunning display of new colours in the pots and borders which are just leaving us. The daffodils and bluebells were very beautiful this year but now the foxgloves are starting to herald early summer which also means weeds in profusion. My arms are stung and scratched 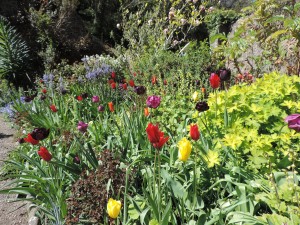 after a bank holiday weekend of pulling nettles, docks and brambles! In the wilder parts of the woodland gardens they appear overnight but are not very welcome; there is only one thing to do…!

Thank you to everyone who visited us on our special wild flower days and at Easter for our Easter Egg hunts. Theresa’s wonderful clues kept everyone busy all afternoon with the reward of a big Easter Egg. We sailed quite close to the wind as we only had four left over; there would have been some very sad faces had we run out! 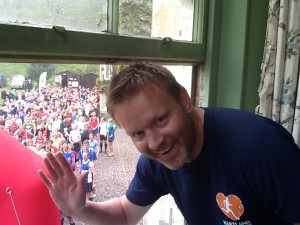 It will be back next year with more challenging clues. There were 300+ runners for this years gruelling Hartland Hartbreaker Run, so brilliantly organised by Simon Haywood. As yet we have not heard the final amount raised for the Childrens Hospice South West. Already 2016 is booked for Sunday May 1st. Our thanks to Simon for his dedication to making this event such a huge success. 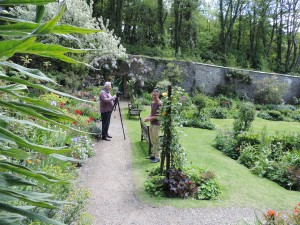 We have just had Christopher Drake, the very brilliant photographer, taking pictures to accompany an article by Janet Gleeson in the BBC magazine Homes and Antiques, for the August edition. It is a great honour to be included in the magazine and we look forward to seeing it in print. We first met Janet when she stayed at Hartland Abbey as part of the Antiques Roadshow team. She is a brilliant author and one of the best books I have ever read, The Arcanum, about the discovery of Meissen china, was written by her and is a must!

We have just had a group of twenty Germans staying in the house for five days of garden visiting and walking. We were very lucky to have had almost wall to wall sunshine and the coastal walks 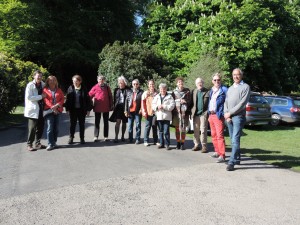 were looking at their best with all the wildflowers. Each year Jenny Curtis Beard, the founder of Curtis Beard Walks, brings a lovely party to stay and savour the glories of staying in an English country house with less than perfect plumbing! It was a very happy week followed by a wonderful group of

the Directors of the Kremlin Museum who visited the Abbey as part of a tour of the Southwest of England. It was a great honour to have had a visit from such an erudite group of Russian people.

We have lots of outdoor theatre coming up soon. Starting with ‘The Magnificent Three’, a spaghetti Western by Miracle Theatre who we love, the season includes something for everyone including a Jazz evening with Digby Fairweather to get the Abbey shaking, a Family Arts Day with the Plough Theatre, the disgusting sounding ‘Mr Stink’ from David Walliams until ‘Emma’ by Jane Austen at the end of August. We have a wonderful Charity weekend of fun in aid of the North Devon Hospice and Cancer Research coming up at the end of June. All the details are on www.hartlandabbey.com under Events.

Our wonderful and gifted neighbour and former architect, Brian Percival, has designed our first Hartland Abbey mug for us. We are thrilled with the design and these china mugs are now adding a class act to the Abbey shop! They are 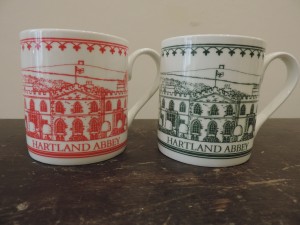 available in green and red and are flying off the shelves!

Thanks to our fantastic and small team of Theresa, our administrator, Carol, our housekeeper, and Nigel, Dave and Sam our gardeners, Leighton and Richard on maintenance and all our amazing house stewards when we are open, we have achieved a TripAdvisor Certificate of Excellence 2015, for the second year running. Thank you to all of you for putting on such a fabulous experience for our visitors. 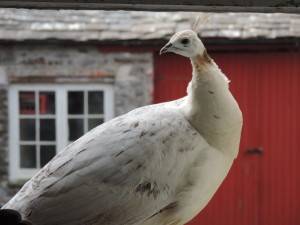 Finally, Marjorie, our rescue white peahen brought to us by the wonderful Diana Lewis of the North Devon Animal Ambulance, is so tame now. She sits on The Little Dining Room windowsill waiting for her toast in the morning. If you are visiting and see Marjorie, please don’t let any children or dogs chase her but do give her a little bit of your cake if you can bear to part with it! She is terribly smelly but absolutely adorable! We are praying she won’t be eaten by a fox or a badger as she is too tame really.

As I write the gardens and walks are looking so beautiful. Foxgloves have replaced bluebells in the walks as the season moves on, the rhododendrons and azaleas are flowering in the Shrubbery and Bog Garden and their scent is filling the warmer air as is the wisteria in the walled gardens. The tulips have faded to be replaced by a burst of herbaceous splendour! My job is to keep pulling up weeds……. 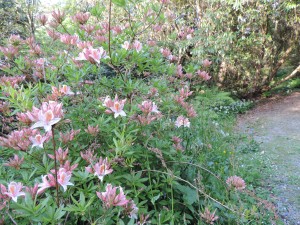 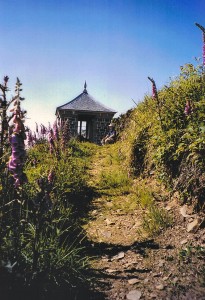 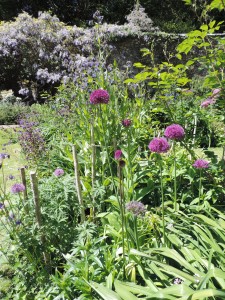